From A Roman Settlement To The Hub Of The Renaissance, An Overview Of Firenze Past & Present

Knowing about the history of Florence will help you to appreciate your visit even more.

This page gives a brief overview of the most important events in Florence history. 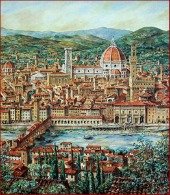 Florence is the capital of its region, Tuscany.

Florence is most known for its achievements during the 14th to 16th centuries.

This is the time of Florence history when the city reached its peak in the humanities and arts.

Some names of people who were active in this era of Florence's history are: Leonardo Da Vinci, Michelangelo, Botticelli, Galileo, Amerigo Vespucci and the great art patrons behind it all, the Medici family.

The First 1000 Years In The History of Florence

Florence was first settled by the Romans in 59 BC.

The area was in central Italy, a perfect stop-off between Rome and the north.

The large river nearby, the Arno, also made it perfect for travel and trade. In fact, the name Florence comes from the Latin 'Florentia' meaning flourishing.

The advantages of this location didn’t go unnoticed though.

For the first 1000 years of the history of Florence the city was taken over countless times and power kept shifting among tribes in central and Eastern Europe (the Goths, Byzantines, the Lombards).

During this first millennium of Florence history construction was started on some of the churches and basilicas which still exist today (albeit not in the same form or size) such as San Lorenzo (393 AD) and the Baptistery of San Giovanni which dates back to the 7th century.

Florence is often called an open-air museum because of the beauty of its buildings and squares. 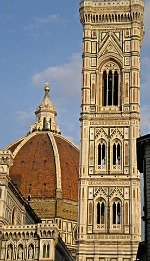 Its architectural style is a mix of the different eras in the history of Florence: Medieval, Gothic, Renaissance and Romanesque.

Most of the buildings, bridges, churches, convents, monasteries and cloisters that we admire today come from this period.

Often the work was started in one century in Florence's history and finished over the course of hundreds of years.

Each project was worked on by different architects, engineers, artists, and sculptors, who got inspiration from the different styles in vogue during their time.

Let's take the most famous building in the history of Florence as an example, the Duomo.

The Duomo was started in 1296 in the Gothic design of Arnolfo di Cambio, in 1335 Giotto took over engineering the famous bell tower, and the cathedral was completed in 1436 with the dome by Brunelleschi, the great renaissance architect (picture above shows dome and bell tower)

An Important Coin In The History of Florence

In 1252 the Florentine gold Florin (il fiorino d’oro) was coined. The coin had John the Baptist, the patron saint of Florence, on one side and the lily flower, the symbol of the city, on the other.

The Florin was a fundamental part of the history of Florence becoming the main currency of trade throughout Western Europe.

The coin continued to be struck until 1533.

The success of the florin was a key factor in the accumulated wealth which grew in the city and which would eventually play a part in financing the city's artistic ambitions during Florence history and the Renaissance.

You can see some examples of the Florentine florin at the Bargello Museum.

Florence was set up as an independent republic in 1115.

By about 1350 approximately 35,000 people lived in Florence with the main industry being the wool trade.

Although the wealthy noble families held the majority of the power, most of the growth of the city was thanks to the merchants.

Florence was a city of wool sellers and bankers and these were the people who moved the economy.

Power struggles ensued in the history of Florence between the nobles and the middle-class.

The merchants eventually formed guilds to represent their groups and gained administrative power.

The guilds are reponsible for little-known part of Florence history.

It was the wool guild who asked Michelangelo, in 1499, to make a sculpture of the mythological hero, David. The statue of David represented their freedom, and the power that the workers had gained.

Today you can marvel at this outstanding example of high Renaissance sculpture at the Accademia Gallery in Florence.

You can also see a reproduction of the statue of David in Piazza Signoria - on the spot where the original Statue of David stood. 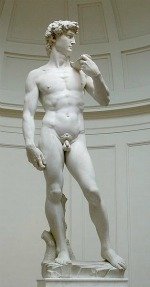 The Plague In The History Of Florence

In 1348 the Black Death struck, the worst plague in Florence history which killed about half of the population of the city.

During this period of hardship in Florence's history powerful citizens and successful merchants were able to assert their authority more easily, the most important being the wealthy banking family, the Medici’s.

This was the start of what we call the Renaissance, the rebirth, today.

During the Renaissance art, literature, music, science, religion, politics, and exploration flourished in Europe, and Florence is generally considered the place where it all started.

The Renaissance Period In Florence History

The Medici were a wealthy family of bankers who also served the Pope.

This gave them clout and they were able to rise to high levels of authority.

The House of the Medici had an enormous impact on the history of Florence. 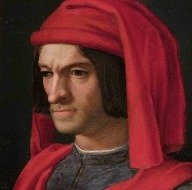 The Medici's used their riches to commission art from the creative geniuses who - as luck would have it - happened to be living in abundance in Florence at the time.

Historians still today marvel at this happy coincidence in Florentine history which started the cultural movement that spread over Europe.

Cosimo de' Medici was the first member of the Medici family to control the city from behind the scenes.

Under Cosimo sumptuous palaces were built and elaborate artworks were commissioned for churches and monasteries.

Lorenzo was to become known as Lorenzo il Magnifico (the Magnificent), the true lord of Florence.

Lorenzo would become the greatest art patron in the history of Florence.

Just to give an idea, here's a short list of some of the people who the Medici were patrons to in the years 1400 - 1600 in Florence history:

Piero, his son, took over. He made some bad political decisions and the Florentines ended up banishing him from the city.

With this, the first Medici period in Florence history ended, in 1494.

History Of Florence - The Bonfire Of The Vanities

During this non-Medici period in Florence history, a Dominican monk named Girolamo Savonarola became an influential authority in Florence.

Savonarola preached against the Medici and the Pope and criticized lifestyles that encouraged material riches and decadence. 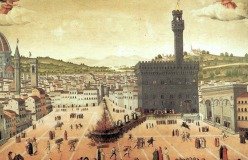 In 1497 Savonarola organized the bonfire of the vanities.

Savonarola was popular with the masses and fought for a more democratic life for the people.

However, his beliefs went against the extravagant lifestyle of the Pope, who, not surprisingly, didn't appreciate his preachings.

His punishment was meant to mirror his Bonfire event and he was eventually burnt at the stake in Piazza della Signoria in 1498.

Today you can see a round metal plaque embedded in the stones in this square remembering this event in Florence history.

At the start of the 17th century Florence started to lose its stronghold in Europe.

The city's business activities of trade, manufacturing and banking were on the decline.

The Medici's, who had been restored to power, lost their last family member, Gian Gastone, who died in 1737 leaving no heirs.

From this time in Florence history, the city was ruled from the outside.

Tuscany was given to the Lorraine family of the French-Austrian dynasty.

In 1859 the Lorraines left Florence and King Vittorio Emanuele became the leader of the Tuscan region.

In the 19th century in Florence history there was an important flux of Anglo-Americans settling in the city.

The poet Elizabeth Barrett Browning lived and wrote here, and is buried in the English cemetery in Piazza Donatello.

The Horne Museum and the Stibbert museum were left to the city by their English patrons-owners.

Florence History - the City as Capital of Italy 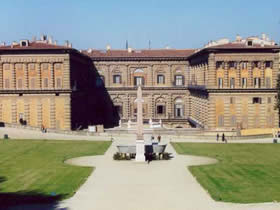 For a brief period in Florence history, the city had the honor of serving as the capital of the Kingdom of Italy, replacing Turin in 1865.

The city was modernized to accommodate the King in his new home.

During this period, the royal family lived in the Pitti Palace (above) just across the Ponte Vecchio.

However, Florence remained the capital for only 6 years and was replaced by Rome in 1871.

During World War II Florence was occupied by the German army from 1943 to 1944.

The allies eventually drove the Germans from the city.

As the Germans were being pushed out, they blew up the bridges connecting downtown Florence to the other side of the river to stop the British troops from following them.

Thankfully, the Ponte Vecchio bridge was spared from these explosions.

Florence history recounts that the German commander acknowledged the historical importance and beauty of the bridge and saved it from destruction.

History of Florence - the 1966 Arno Flood

In 1966 the river Arno overflowed creating a flood which killed many people.

Famous masterpieces were damaged, hundreds of rare books were destroyed, and the city's infrastructure was in ruins. 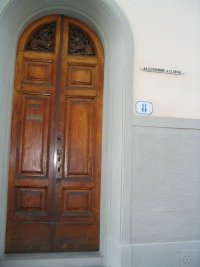 Volunteers from all over Italy and Europe came to help.

The name came from the fact that they had to work and walk through so much mud and sludge left after the flood.

When walking around Florence today you can still see the affects of the flood.

If you pay attention, many buildings have stone markers indicating the level that the water reached on this day in Florence history.

As an example, the picture above shows a marker to the right of door, above the number 8.

The Monster of Florence - a Cold Case 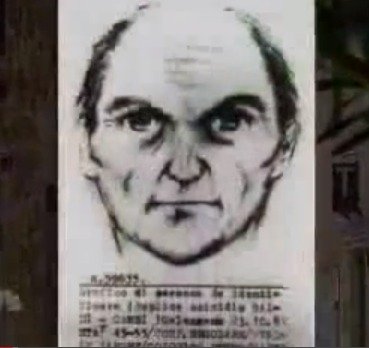 The recent history of Florence includes a very dark story.

The Monster of Florence is the name commonly given to the person responsible for the killing of 7 couples in the hills around Florence between 1974 and 1985.

The Mostro di Firenze is considered a case that is unique in the history of criminology and has been studied by experts on an international level.

In spite of the enormity of the investigation, the aid of world renown crime units such as the FBI, and several court trials leading to contradictory outcomes, the Monster of Florence case is still considered an open case.

Note: this page recounts crimes which could offend the sensibilities of some readers. 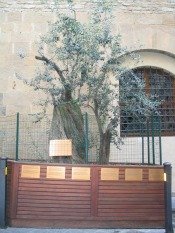 Just outside the Uffizi museum on a quiet narrow side road, a car bomb exploded in the middle of the night.

This act of terrorism - in which 2 children and 3 adults died, 30 others were wounded and which caused damage to the nearby historic buildings and the art work inside - was attributed to the mafia.

Today, an olive tree stands in the spot where the bomb exploded, remembering this sad day in Florence history and representing life which goes on.

Interest in the history and culture of the city and the Renaissance is still extremely strong.

Undoubtedly tourism is one of the main industries in Florence.

Other activities that local Florentines work in are traditional crafts like Florentine mosaics and ceramics, jewelry design, fashion and textiles, leather goods, art reproductions, shoes, and gold and silversmith industries.

Florence today is also widely known for its student life.

Apart from the University of Florence, the city has over 30 campuses of foreign universities.

Florence is also home to Polimoda, the fashion design school and countless other schools teaching Italian language and culture.

For some curious stories concerning Florence history read some interesting Florence anecdotes which you might enjoy learning about.

return to Homepage from History of Florence