Michelangelo's Sculpture Is World Famous, Yet
There's More Than One David in Florence... 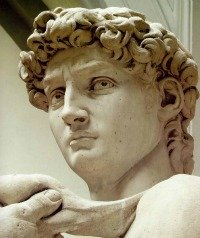 The Statue of David by Michelangelo at the Accademia Gallery is just one of the famous Davids in Florence.

Many artists have created their likeness of the biblical hero, one of the main symbols of Florence.

Read here about the David's that came before (and after) Michelangelo's.

Knowing the differences and the similarities between the statues, and how each great work fed off the others will enrich your experience of seeing these unique Renaissance sculptures.

The Philistine army was fighting the Israelis.

A giant, Goliath, was part of the Philistine army and the Israelis were terrified of him. 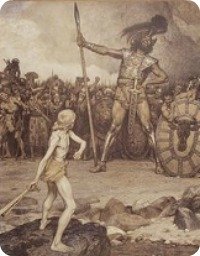 David was a young boy – not part of the army – but who was nearby.

He saw how Goliath taunted and mocked the Israeli soldiers and he got angry.

David volunteered to fight the giant.

Not being a soldier, David wasn’t familiar with armor or weapons, and refused both.

He went with his simple tunic and slingshot.

David felt that his people were in the right and God would protect him – justice would prevail in spite of the weapons that the Philistine giant had.

With one shot of his sling, he got a stone to pierce Goliath’s head, the giant collapsed, and David then took Goliath’s sword and cut off the giant’s head.

The Connection Between David and Florence

Ever since Renaissance times, Florence has seen David as an emblem of the city.

David’s strength, courage and youthful confidence were the image that Florence wanted to project.

In the 1500’s Florence had regained its status as a republic. David symbolized the city’s independence from outside domination, both foreigners and the aristocracy.

Like Florence, David turns out to be more powerful than he looks.

Standing guard outside the government offices, the statue is also a reminder of the example to follow: defend boldly and lead justly.

The statue of David by Michelangelo

Michelangelo’s statue of David has become practically a synonym for Florence.

The making of this famous sculpture had a difficult history.﻿

The marble block that Michelangelo used to make the David had been sitting in the courtyard of today’s Museum of the Works of the Duomo for over 20 years.

Two other artists had previously tried to satisfy the Wool Guild's request for a gigantic David, but had found the quality of the marble poor and the massive size too difficult to work with and had given up.

So, the partially chiselled mass lay abandoned and exposed to the elements while the commissioners kept hoping to find another sculptor who could make something of it.

Michelangelo thought he could do it, and took on the job.

He started in 1501 and three years later, on 24 June 1503 (the holiday celebrating the patron saint of Florence, St. John the Baptist) Michelangelo’s outdoor workshop was opened to the public.

Like Donatello’s marble David, the sculpture was originally meant to stand on one of the pedestals near the cupola of the Duomo.

It was clear right away that the David was far too special to be put high up on a church buttress.

The picture below shows how this would have looked. 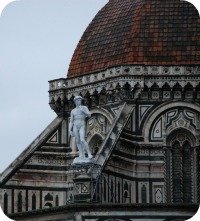 A committee was formed to decide the most suitable location to put the masterpiece.

The committe was made up of Florence's most authoritative citizens, including fellow artists.

It was decided to put the David in front of the main entrance to the town hall.

A funny note: Leonard da Vinci was on the committee to choose the best place to put the David.

Rather than at the entrance to the building, he suggested a niche on the side of the Loggia – a much more concealed spot.

This is considered an apparent case of artistic jealousy between the two geniuses, who supposedly weren't bosom buddies.

One of the most notable and unique aspects of Michelangelo's David was that the artist had broken away from his predecessors.

Michelangelo was the first artist to depict David getting ready to fling his slingshot, rather than after having defeated the giant.

As a result, this is the only Renaissance David that doesn’t include the severed head of Goliath.

This choice by Michelangelo would influence later depictions of David.

One example is the 17th century sculptor Bernini whose statue of David (below) also shows the hero ‘before the fact’. 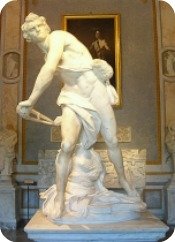 Moreover, Michelangelo’s statue of David seems to have a deeper meaning than the others.

His hero abounds in both intellect and strength: his eyes squint ever so much in concentration, his mind is calm and deeply focused and there is perfect harmony between David’s muscles and the power they exude.

Some say that Michelangelo wanted to express his vision of modern man, or the man of the future even.

Just like David, he seems to be saying that man is master of his own fate, capable – through his God given gifts – of previously unthought-of accomplishments.

Michelangelo's David can be seen at the Accademia Gallery.

The First David by Donatello

Donatello was the first Renaissance sculptor commissioned to make a statue of David in 1408.

This David was sculpted in marble and is quite traditional.

The young hero is seen from the front, dressed in robes, with the head of Goliath victoriously at his feet.

The statue is more-or-less life sized at just over 6 feet.

David is seen in the conventional posture of a triumphant youth with classical features similar to sculptures found in ancient Greece or Rome.

The work was commissioned by the Operai (literally, ‘workers’) of the cathedral who were in charge of the art work in the basilica.

The original idea was to have statues of biblical figures placed on the ledges around the terrace of the Duomo.

Once the statues were placed on the buttresses though, they turned out to be too small to be seen from the ground and were removed.

In 1416 the government of Florence (the Signoria) requested that the David, which had not found a ‘home’ yet, be displayed in Palazzo Vecchio, the town hall.

David had already acquired political meaning for the city of Florence.

Made in the 1440’s, this statue was cast in bronze and stands at just over 5 feet.

This second David couldn’t be more different from his first.

To begin with, the boy is completely naked, except for – of all things – a stylish wide-brimmed hat (or helmet) with a floral arrangement on top, and a pair of boots tight to the calves.

This is a bizarre get-up that scholars still have a hard time explaining.

It’s been described as ‘David with a fetish’ by some.

Then, David – although certainly a hero – does not give off the aura of strength or virility.

In fact, he’s quite effeminate.

His hand is on his hip which is pushed out to the right in an almost flirty pose.

There’s also his expression: it doesn’t seem fitting for the occasion.

He has a far-off look, a wistful air about him, in contrast to a young man who has just slain a giant, sword still in hand and head at his feet.

His lack of muscles and visible power could be seen as consistent with the age of a very young boy, although his slight paunch in the belly seem to, undoubtedly, be making an effeminate reference.

This is also the only statue of David that depicts the hero with long hair hanging way down his back in ringlets.

Some think Donatello meant his David to be homosexual, although there is no factual evidence to back up this theory.

The most widely accepted explanation for such an original take on the figure of David by Donatello is that the artist merely wanted to break away from all classical and traditional ideas of the male nude.

Like all great creative minds, he was an innovator.

And the result is sublime.

This statue of David was likely commissioned by the Medici.

The sculpture was in the courtyard of their home and was later sold by the family to the Signoria of the town hall.

Both of Donatello’s Davids are on display at the Bargello museum.

The statue of David by Verrocchio

Verrocchio was a Renaissance artist who, for most of his life, worked for the Medici.

He had an even more famous Renaissance artist as a pupil in his Florence workshop, namely Leonardo Da Vinci.

It has been said, in fact, that it was the young and handsome Leonardo who was the model for Verrocchio’s David.

Verrocchio’s David (circa 1475) is a delicate bronze statue that is just over 4 feet tall.

This statue was also commissioned by the Medici.

Verrocchio’s David is clothed in a sort of tunic.

One original touch that Verrocchio added was to put gold paint to the trim of David’s clothes and the waves in his hair.

The head of Goliath is not a part of the whole statue, but was cast on its own and is a separate piece placed at the feet of the boy.

They’re both in bronze, both Davids have their left arm bent and leaning on their hip, and both have the head of Goliath at their feet.

Both boys are holding Goliath’s sword in their right hand.

They differ in that Verrocchio’s statue of David is modestly dressed whereas Donatello’s is bold and brash in his nudity.

They both have a slight smirk, typical of adolescent swaggering.

Where Donatello’s depiction is cheekily unique in its beauty, Verrocchio’s is traditionally and poetically striking.

Verrocchio’s statue of David can also be seen at the Bargello Museum.

I highly recommend that you go to see Donatello's and Verrocchio's Davids.

If you do, you might find yourself wondering how an artist can 'sculpt' something in bronze, a metal.

It's certainly not like chiseling into clay, plaster or marble, right?

The answer is, you don’t.

You sculpt into wax.

First the artist builds a sort of skeletal ‘base’ made of metal rods and clay that has more or less the shape and size that the final statue will have, but not the details.

On top of this sturdy foundation, a thin layer of wax is spread and the artist sculpts the details into this material.

Then, the wax original is covered in soft plaster.

When the plaster is hardened, holes are put into it and the wax inside is heated, until it melts away (really melts OUT of the plaster cast, passing through holes).

Once the plaster cast is hollowed, the molten bronze can be poured into it.

The liquid bronze fills the nooks and crannies left by the now-gone wax.

Once it’s cooled and hardened, the plaster outside is removed, and voila!

The statue of David by Donatello and Verrocchio were made using this 'lost wax' method.

back to FlorenceWebGuide Homepage from Statue of David