The Best of Renaissance Sculpture, Including the Statue of David by Donatello - Not to Be Missed!

The Bargello Museum is where you can see see the most important and largest collection of Italian Renaissance sculpture, and.....there's hardly ever a line to get in! 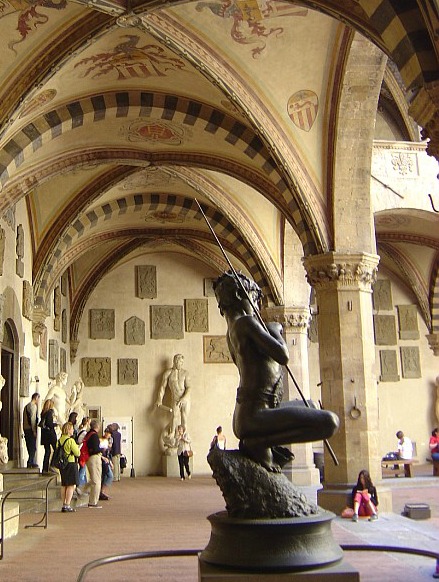 This museum is not nearly as well known as some other Florence museums which often have long lines, so you can usually just get a ticket and go straight in.

The atmosphere in the museum is unique thanks to the historic building it's located in.

This medieval palace goes back to the 1200's and is rich in history and character.

Moreover, the building’s courtyard is one-of-a-kind (more on this below).

The palace of the Bargello museum was originally home to Florence’s early administrative offices.

It then became the headquarters of the bargello, a military figure in the Middle Ages (something like today’s chief of police).

The building has also been used as a jail and was the police headquarters until 1860.

In 1865 the Bargello Museum was opened.

The courtyard provides a dramatic entrance to the museum, and is also very famous in its own right.

As a court, it has a unique geometry.

It's square with an eight-sided well in the middle, arched porticos on 3 sides and, on the fourth side, an impressive stone staircase leading onto an open balcony (loggia) with sculptures. 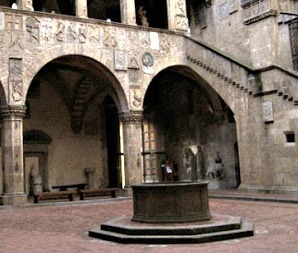 The walls are decorated with the coats-of-arms of the past podestà (main city administrators) as well as the administrators of justice who sentenced the prisoners.

As you walk around the building admiring the grand halls and stunning art work, it's a sobering contrast to be aware of the fact that these same places used to be prison cells and the inner court was a location for carrying out punishment (even capital punishment until this was outlawed in Florence in 1786).

The Bargello Museum's courtyard is especially striking on a sunny day.

The highs and lows of the surrounding buildings and towers create patches of sun and shadow that play off each other, the stone walls and the elegant porticos.

Before you even enter the building, right in this outdoor area, you can see a vast collection of Renaissance sculptures. 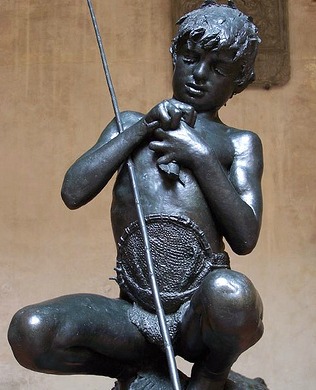 One of the most popular pieces is ‘the Fisherboy’ by Vincenzo Gemito (left).

This is an uncanny rendering of a young boy single-mindedly engaged in what he is doing: fishing.

Gemito did a remarkable job of capturing the sense of freedom in the boy’s action and the exquisite details create a startling naturalness.

Many of the other statues and sculpture arrangements in the court were originally created for Medici gardens and fountains.

For this reason themes such as land, water, animal life, and similar ideas are often the subject of the works in this outside collection. 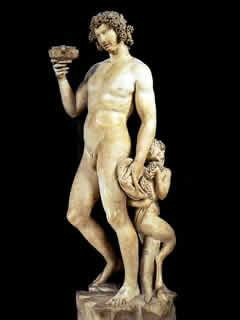 This area is just off the courtyard and is dedicated to sculptures by Michelangelo and other artists from the 1500s.

In this section you can see one of the few sculptures by Michelangelo that has a non-sacred theme, the statue of il Bacco, the god of wine (left).

Michelangelo made this work when he was just 22 and it is one of the museum's most loved pieces.

His Bacchus is depicted as being tipsy, a bit bloated and quite un-God like. There is a small faun behind him sneakily munching on his grapes.

Along with other pieces by Michelangelo you can also see works that depict the great artist himself.

One of these is a bust which gives you a close-up look at Michelangelo’s very expressive face (bottom). 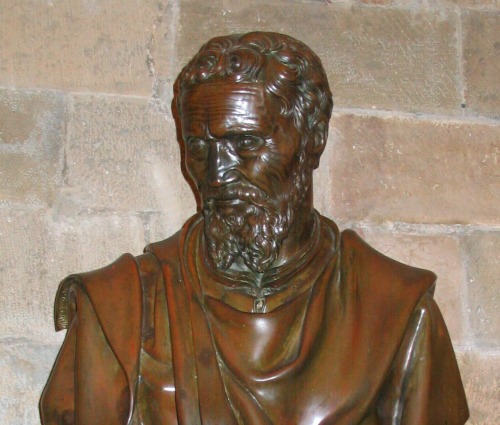 Another extremely popular work of art that you can see in this room in the Bargello is Giambologna’s bronze statue, Mercury (1576).

This sculpture was originally commissioned to be placed at the university in Bologna, Europe’s first university.

Although this never actually came to pass, Giambologna kept with the idea and finished the work anyway.

The god and messenger, in fact, is seen with his index finger pointing to the sky indicating the divine origin of knowledge.

This piece strikes you for its remarkable lightness and seeming fluidity of movement, as if the subject actually is in flight (see photo below). 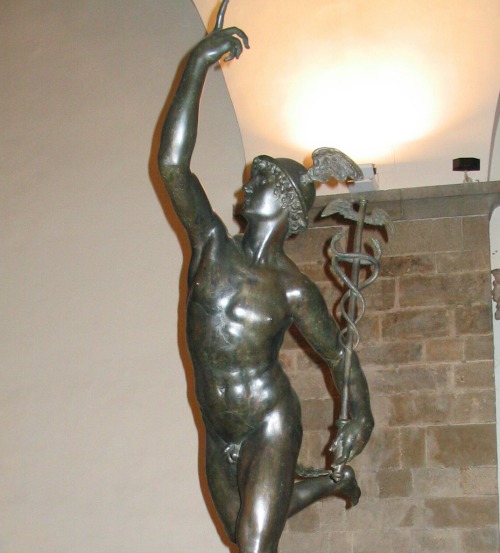 This section of the Bargello museum is where you can see Donatello’s two depictions of David: his earlier marble statue and his very original bronze David, the first statue of a male nude created during Renaissance times.

Read in detail about Donatello's two statues on this page about the Statue of David. 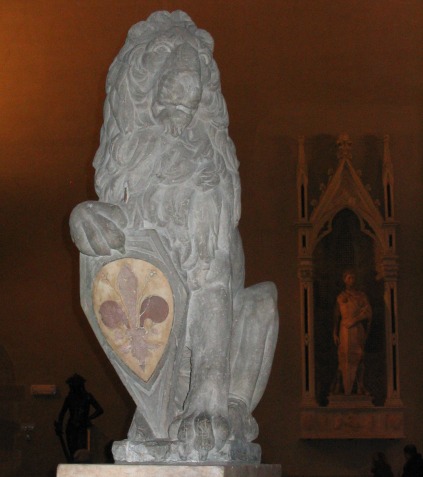 This room is also home to the Marzocco, the lion, another symbol of Florence made by Donatello in 1420.

This sculpture shows the lion’s paw leaning on yet another emblem of Florence, the coat-of-arms with a lily flower (the famous giglio) and was originally placed outside the Palazzo Vecchio, the town's city hall.

Another celebrated statue by Donatello is the sculpture of St. George, the patron saint of armourers, one of the large guilds founded in Florence.

This sculpture was originally a part of the Orsanmichele church. The statue which you can see today in the church wall niche is a replica.

Verrocchio was an artist working at the court of Lorenzo il Magnifico in the second half of the 15th century.

Although his greatest claim to fame is probably the fact that he was tutor to a young Leonardo da Vinci who was an apprentice in his Florence workshop, Verrocchio produced several masterpieces of his own. 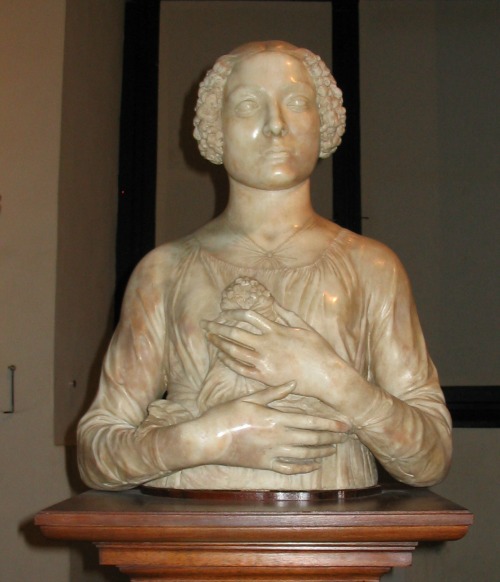 His most notable pieces are on display in this part of the Bargello.

You can appreciate the naturalness of his renowned bronze Statue of David which has been recently restored (note: sometimes this piece however is moved, and is shown in the Donatello room near the other Davids).

Verrocchio's depiction of the young biblical hero was the last David statue made before Michelangelo embarked on his masterpiece.

Verrocchio's popular bust the Dama del Mazzolino (the Lady with a Flower Bouquet’), circa 1475, is another much admired piece and was considered a rare work for its time.

This is one of the first busts that doesn’t stop at the shoulders but includes most of the woman’s torso as well as showing the subject’s hands which are particularly expressive and natural looking (above).

Taken from their original location, from gardens in Medici villas in and around Florence, the location of these pieces on the outside loggia is quite appropriate. 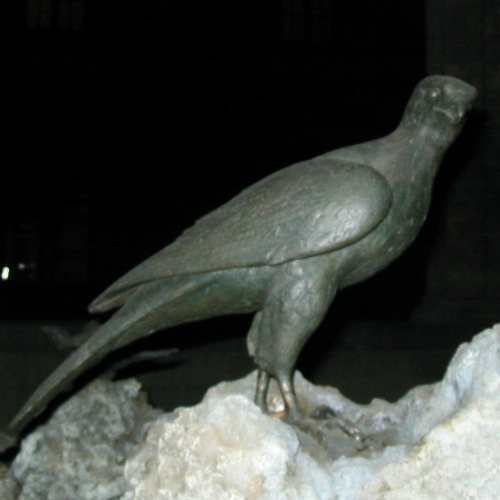 This setting gives you the feeling that the animals are in their proper habitat.

The birds are not cooped up indoors but outside in the open-air on the balcony.

You get the impression that the eagle has just swooped down, landed and is perching on a rock. The falcon seems to want to prick you with its beak.

the Rest of the Museum

The Bargello museum also has one very large collection that is entirely dedicated to small bronze replicas of the most noteworthy and popular Renaissance sculptures from all over the world.

This room is jam-packed and is a real feast for sculpture buffs.

The rest of the museum has several rooms each dedicated to different types of applied art:

For instance, if you’re a coin collector, the exhibits on historic and antique coins and medals would obviously be right up your alley.

Similarly, a jewelry lover would probably be thrilled by the selection of regal gems and antique pieces on display in the jewelry collection.

To sum up, the Bargello Museum has some not-to-be-missed masterpieces which are all the more impressive thanks to the setting and atmosphere of the building itself.

Moreover, the museum is rarely crowded, which makes it all the more pleasant and enjoyable to see the work on display undisturbed.

Two hours should be more than enough to see the whole collection in the Bargello without rushing.

Overall, I think most people would agree that this is a very memorable museum-going experience.

Find out about a Florence Card museum pass!

You might not have heard of the Bargello before, but I doubt you'll regret having taken the time to go there.

the Bargello Museum, via del Proconsolo, 4

see the official site of the Bargello museum for ticket prices and the most updated information.

back to FlorenceWebGuide Homepage from Bargello Museum

back to Florence museums