The Historic Building in Piazza Signoria, Home of  the Republic of Florence and Original Statue of David 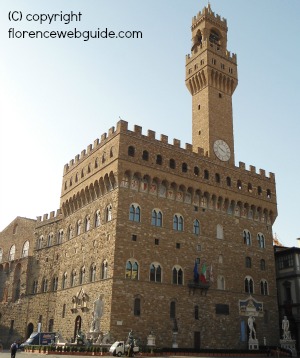 One of the most monumental and easily recognizable palaces in all Italy, Palazzo Vecchio in Florence and its setting in Piazza della Signoria is a glorious sight.

The building was originally built for one main reason:

Florence was run by members of the town's guild associations who stayed in office for a mere 2 months.

During this short period however, the men were not allowed to have any contact with the outside world (no family, no friends, no other work) as they were supposed to focus entirely on governing the republic.

This palace was constructed to provide a secluded environment where the men could work in isolation.

Originally the building was much smaller than the building we see today which has seen extensions throughout its over 800 years of life.

David 'lived' for over 350 years just outside the main entrance to the palazzo (in the spot where a replica stands today).

Mini-History of the Palace

The Palazzo goes back to about 1290 and was designed by Arnolfo di Cambio, the same architect who designed the Florence cathedral, Il Duomo.

However, the building underwent a major facelift in the 16th century under Cosimo I de Medici who was Duke of Florence.

Cosimo turned these civic quarters into his ducal palace, so the building which had been exclusively a seat of government up until that time suddenly became also a regal residence.

Eventually, however, Cosimo moved the family to Pitti Palace and the Palazzo went back to being mostly just government offices.

About the Name, 'Palazzo Vecchio'

Literally meaning 'old building' this name was adopted in the 16th century.

Duke Cosimo I's wife, Eleonora di Toledo purchased Pitti Palace for the family to have a more spacious and elegant abode as she considered the palazzo  'too modest' a dwelling for her standards.

Therefore, Pitti became the 'new' home and Palazzo Vecchio got its name as the 'old' residence.

However, the building has had several names in its long lifetime.

Initially the palace was named 'Palazzo dei Priori', as 'priori' was the name of the guild members who served the two month terms of office.

At another point it was called 'Palazzo Signoria', as the 'signoria' were were the local citizens who took part in running the Florentine republic along with the 'priori'.

Today, the name of Signoria has remained as the name of the square where the building is located, Piazza Signoria.

Today the building is Florence's town hall, including the mayor's office and municipal offices.

The rest of the building is a museum dedicated to the history of the Republic of Florence and the use of the palace as a ducal residence by the Medici.

Looking at the front of Palazzo Vecchio just under the crenellated parapet is a series of coats of arms.

If you take a closer look, you'll see that what seems like a long line of crests is really a series of 9 shields which repeat themselves in the same order.

The shields were painted in their niches in about 1340, and each has a specific meaning in the history of the Florentine Republic, although the first two are by far the most significant.

1) a red cross on a white background, the cross of the people representing the Florentine citizens

2) a red iris flower (il giglio) on a white background, the symbol of Florence

The following seven coats of arms represent different aspects of the city's past such as historic events, ideals promoted by the republic or important alliances established with other territories or influential figures: 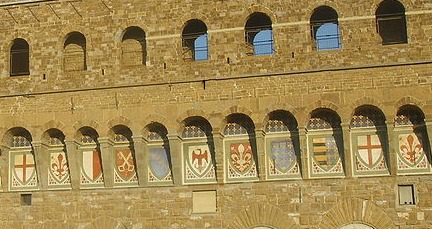 3) a shield divided in two, the left side white and the right side red, representing Florence's union with the nearby town of Fiesole in about 1010

4) two gold keys, the crest of the church

5) a blue shield with the words 'libertas' written in gold, representing the freedom of the citizens to rule their own city

6) a red eagle on a white background, coat of arms donated by Pope Clement IV to the Florentines in the 13th century

7) a white iris flower on a red background, the first symbol of Florence used by the Ghibellines (the nobility who were initially in charge of the city)

8) a blue background with gold lily flowers, donated by Charles I King of Naples 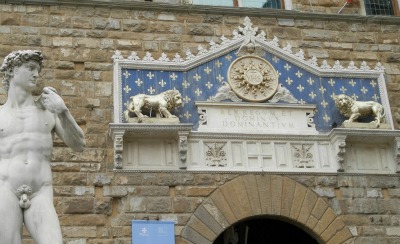 The marble decorative plaque above the main entrance consists of the two main symbols of Florence: the lion and the lily flower.

At the center is a Christogram with the sun's rays circling the letters YHS with a cross above the H, a Latin monogram standing for Jesus Christ.

The latin wording below refers to Jesus Christ and can be translated as 'King of Kings and Sir of all Sirs'.

This inscription goes back to the Florentine government of Savonarola, the religious zealot who saw Jesus as being the sole 'leader' of the republic (circa 1495).

Named after the building's architect, this bell tower which juts out of the palazzo is 94 meters tall (over 300 feet) and can be seen from miles away.

Just above the tower is a bronze weather vane in the form of Marzocco, Florence's renowned lion.

Marzocco is holding a staff that is topped with a giglio flower.

But the tower is not just a watchtower.

An area inside houses what is jokingly referred to as the 'alberghetto', literally 'small hotel'.

This 'hotel' is really a jail cell and was used to hold prisoners waiting sentencing. 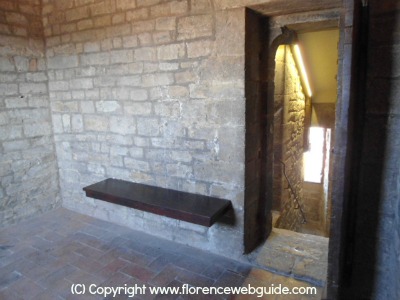 Two of the most famous prisoners held here were Cosimo the Elder before his being exiled in 1433 (Cosimo was one of the first Medici to run the city), and Savonarola, the Dominican monk who was later burnt at the stake in 1498.

This bell tower has 3 different size bells, all with a different timbre of ring, used in the past to call Florentines for different occasions, each bell having a unique use.

The tower can be visited on its own or with a surcharge on tickets to the Palazzo Vecchio museum - needless to say, the top offers wonderful views over the city! 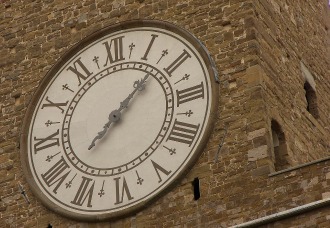 The still funtioning clock located on the front of the tower goes back to the 14th century.

Look at the picture - notice anything strange....?

This is a clock with no minute hand, but just with marks along the clockface to indicate 15 and 30 minute intervals!

The city's first public time-teller, the original clock was installed in 1353 (today you see a replacement dated about 1670).

the 'Hidden Portrait' chiselled by Michelangelo

To the right of the main entrance in the lower corner of the palace is a profile portrait chiseled in the building's facade. 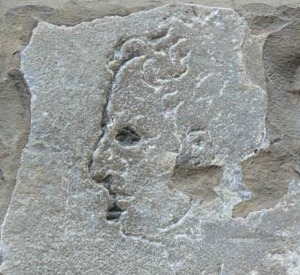 This rough sketch in the stone is attributed to none other than Michelangelo.

There are two commonly-heard stories behind this stone portrait.

One is that Michelangelo, while passing by this spot, was often disturbed by a local man who had the annoying habit of talking too much and boring others.

One day, the great master, while being bored by the man's blabbering, turned his back and quickly chiselled the likeness of the man into the stone as a way of entertaining himself.

Another explanation is that the stone profile is the portrait of a man who had been condemned to the death penalty.

Michelangelo happened to be present as the man was being accompanied through Florence to meet his cruel fate, and the great artist decided to immortalize him on the spot.

Just inside the main entrance is the first courtyard of Palazzo Vecchio.

At the center is a replica of a sculpture of a small cherub with a dolphin by Andrea del Verrocchio, the artist whose workshop Leonardo da Vinci was apprenticed in (the original - dated 1470 - is in the building museum).

The courtyard was added in 1453 and was designed by Michelozzo.

What's interesting to note are the frescoed walls surrounding this smallish court.

In 1565, Duke Cosimo I's son, Francesco I, got married to Joan of Austria.

How to make the bride feel at home in a new country?

By painting the walls of her new home with scenes of Austrian cities, which is what these (not very well preserved) frescoes represent!

This iconic Florentine landmark has also been an inspiration to later architects whose works were based on the structure and style of Florence's famed civic building.

Two examples include the city hall building of the German city of Furth (circa 1840) and Mackenzie Castle in the Italian city of Genoa (circa 1900).

The pics below show the clear influence of Palazzo Vecchio.

Find Out More about Florence!

back to FlorenceWebGuide Homepage from Palazzo Vecchio