the Florence Cathedral Bell Tower is Rich in Symbolism and Can be Climbed for Great Views of Firenze! 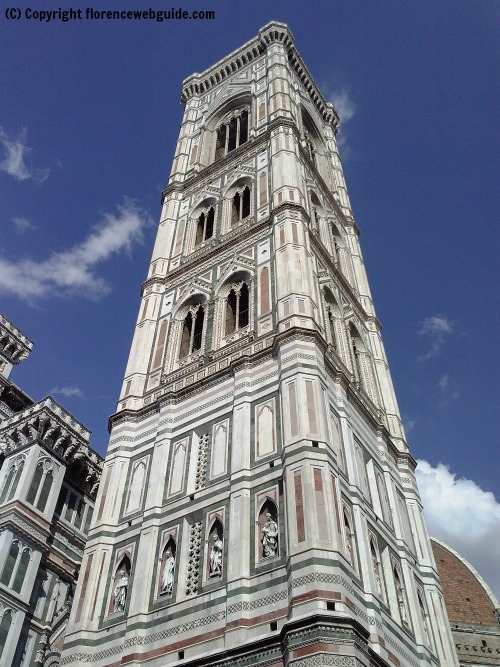 The Campanile di Giotto, the Florence cathedral bell tower, was designed and worked on by Giotto between 1334 and 1337 (the year he died).

The tower stands at about 278 feet tall, and like much of the cathedral, is Gothic in style and is decorated in green, white and pink marble.

One of the most popular things to do in Florence is to climb to the top, a great place to see the beauty of the city from above and take some magnificent pictures!

A climb up the Campanile di Giotto means walking up just over 400 steps.

Don't worry if you're not in great shape, there are several mid-way landings where you can leave the stairwell, sit down and admire the views at each stage of the climb!

It's easy to admire the elegance of the tower from afar, but a closer look is even more intriguing....read about the imagery that decorates this iconic Florence monument below!

the First Level of the Campanile di Giotto

Although the mastermind behind the tower was Giotto, the maestro was only able to carry out the material building of the first section of the campanile.

This first 'floor' however is the closest to the pavement and therefore the easiest to appreciate, and is decorated with hexagonal marble tiles with sculpted reliefs.

There are seven reliefs on each of the four sides of the tower.

After Giotto died in 1337, Andrea Pisano (the creator of the first set of bronze doors for the Florence Baptistery) took over the work on the tower.

These six-sided tiles were made for the most part by Pisano and his assistants with very likely a generous amount of influence by Giotto too.

The only exception is for the hexagonal tiles on the side of the tower facing the cathedral.

These were done much later by Luca della Robbia when a passage-way between the two buildings was closed up.

Symbolism of the Tiles

The first row of tiles on the Campanile di Giotto tells the story of man: his creation and evolution.

The civilization of man is depicted through images symbolizing the learning of the skills and labor needed to survive.

Below are some examples: the creation of man and the start of agriculture.

As you circle the tower you see man learning more and more advanced skills such as music, medicine, hunting, textiles, navigation, painting, poetry, math, astrology and many others,

Below see a blacksmith and the art of building.

The Second Level of the Campanile di Giotto

The second storey of the Florence bell tower has diamond shaped elongated tiles, each with a blue Majolica background made by Andrea Pisano, his assistants and Maso di Banco.

In contrast to the first level of tiles representing man's birth and development on Earth, the second group of reliefs represent celestial and spiritual forces.

The Images of men and women (more of the latter) represent moral traits and beliefs. 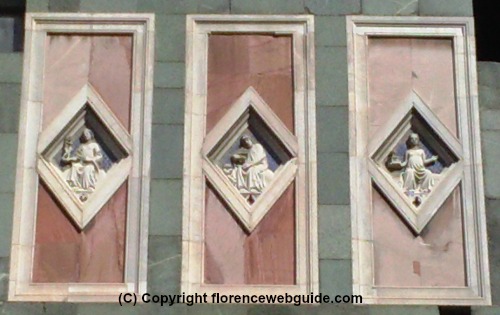 Below see Venus holding a pair of lovers and Hope depicted as an angel with wings in a state of prayer.

Two more examples: Justice on the left with sword and scales and Geometry with book and compass.

On the last side - directly next to the cathedral - the Sacraments such as marriage, confession and baptism are shown.

The Third Level of the Campanile di Giotto

The third level of the bell tower has a series of four niches on each side, each holding a statue, several of which were sculpted by Donatello.

Although from the ground these statues may seem smallish, they are actually life-sized. 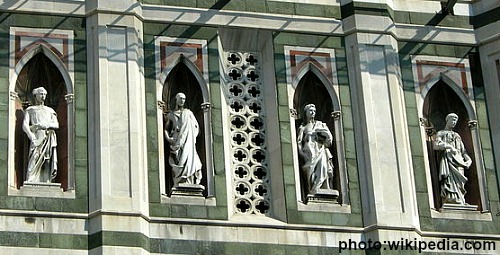 The statue of the prophet Habakkuk below, dated 1425 was one of Donatello's favorites of his own works.

This bald figure, so strikingly life-like, is also known affectionately as 'pumpkin-head' in Italian (Zuccone). 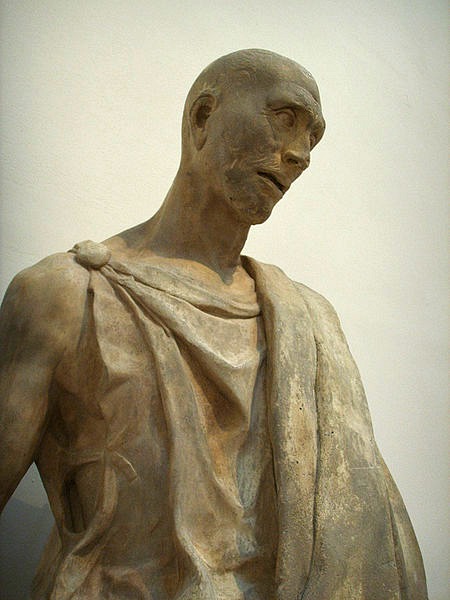 Donatello's sculpture of Abraham sacrificing his son Isaac is one of the more powerful images of the campanile statues. 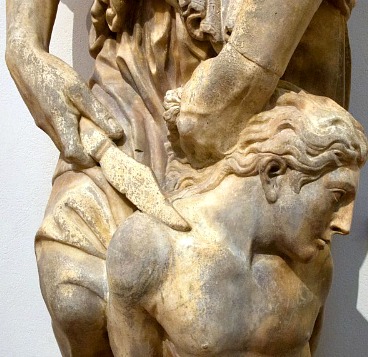 All of the decorative tiles and sculptures on the bell tower are replicas of the originals.

This is because the original works have all been moved to the Opera del Duomo Museum for conservation (the reproductions however have all been made from casts and are highly accurate).

The museum lets you see the original relief works on the tiles and statues up close, much closer, in fact, than you ever could if they had remained high up on the tower!

Entrance to the Cathedral Museum is included in the price of a ticket to climb up the bell tower.

Climb Up the Florence Bell Tower

It's possible to walk up the 400+ steps to the top of the campanile where you get some fantastic views over the city.

The climb up can actually be quite relaxing because - as opposed to climbing up the cupola or the Arnolfo tower - the campanile di Giotto has plenty of stops to rest.

This is because the bell tower is divided into storeys where each of its seven bells (one bell for each musical note!) 'lives', and these floor divisions are landings where you can sit on the stone benches and enjoy the views as you ascend.

Here are some shots taken from the climb up:

Below see one of the seven bells and Brunelleschi's cupola. 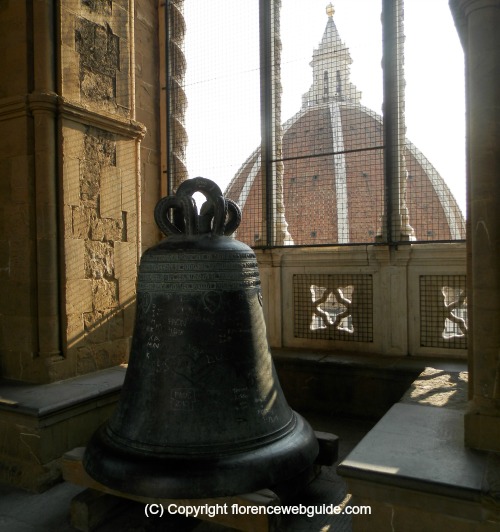 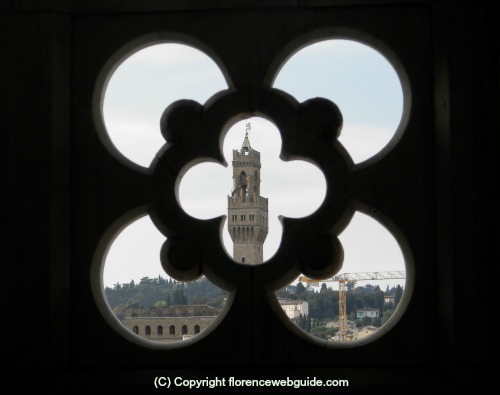 And below the terrace at the top of the tower.

As you can see it's highly protected! 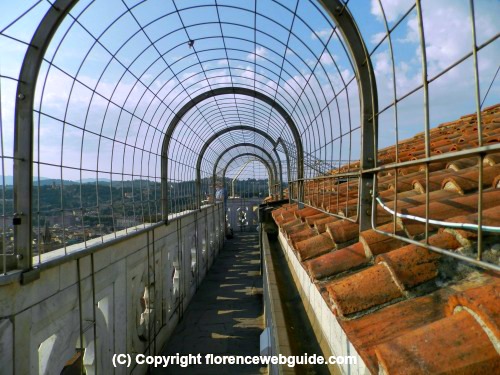 where: piazza San Giovanni, entrance at the 'back' of the tower

cost: €10 ticket which gets you into whole Duomo complex (the Cupola, the Museum, Santa Reparata, the Baptistery and the Duomo (which, however, is free of charge)

back to Homepage from Campanile di Giotto