Home of the Original
Statue of David by Michelangelo

At the Accademia Gallery there’s only one star and that’s David.

Of course, there are plenty of others things worth seeing, but the main reason everyone comes to the Gallery is to see Michelangelo’s masterpiece. 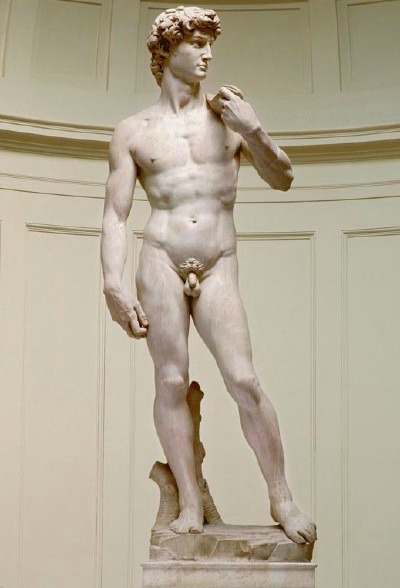 Some people ask: ‘Is it worth it to pay the price of a ticket just to mainly see one famous piece?’

Others say: ‘I’ve seen the replicas of David in Piazza della Signoria and Piazzale Michelangelo, isn’t that just as good?’

A special annex to the Accademia Gallery was built just for this sculpture and the hall leading up to the statue and the lighting on the David add tremendously to the experience of ‘seeing David’.

The David more than lives up to its fame.

I’d even say that if you’re the type of person who is not at all interested in art, and are just being dragged to the museum by a friend, you too will be astonished by the beauty of this work of high Renaissance sculpture.

I think you'll feel moved, and privileged even, to have had the opportunity to get so close to this artistic tour-de-force.

About the Statue of David

Michelangelo, who was a mere 26 when he made this sculpture, dedicated three years (1501- 1504) to creating his likeness of the biblical hero.

This is what Giorgio Vasari – who was no slouch himself, a famous painter, sculptor, architect, and contemporary of Michelangelo - said: Michelangelo’s David surpasses "all ancient and modern statues, whether Greek or Latin, that have ever existed."

David was a biblical figure, who slew the giant Goliath against all odds, and using his very simple weapon – a slingshot.

Michelangelo’s view of David catches the hero the moment just before the battle. 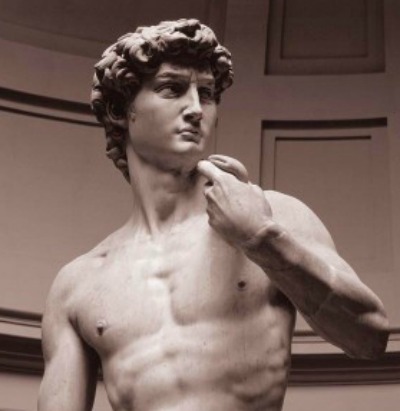 Previous representations of David had always shown him already with the head of Goliath at his feet.

The statue is often called an homage to strength and power but it is just as much a tribute to the intellect of man.

In fact, although David is clearly muscular and extremely strong, he is relaxed and calm, his muscles are not tense or rigid.

He’s deeply concentrated (see the way his eyes squint and his brow is furrowed) and his sling hangs loosely, freely over his shoulder.

He’s ready – and he knows that it’s his greater brain power and psychological advantage that will win in spite of the size of Goliath.

He’s looking in the direction of the giant, ready with his rock in his right hand, about to attack, utterly confident, even cocky and with contempt.

All this is captured flawlessly in Michelangelo’s work on display at the Accademia Gallery.

Some History about David

Michelangelo’s David has also come to represent Florence itself.

The statue was commissioned by the Wool Guild, a strong association of merchants in Florence.

After years of having no say in government and being under the authority of Florentine nobles, the guild and other merchants had managed to reinstate a republican government.

In fact, the original statue stood outside Palazzo Vecchio (the government offices) representing this new-found power of the people (it was then replaced with a reproduction, there today, and the original moved to the Accademia Gallery).

So much can be seen in this one work of art: a symbol of strength, the beauty of youth, or simply beauty in and of itself, the intelligence of man, the notion of ‘right’ winning over ‘wrong’, the idea that the mind is more powerful than mere muscle, an homage to bravery in the face of adversity, and last – but certainly not least – a testimony to what one human being is capable of producing from a simple block of stone.

Now let me tell you about the rest of the Accademia Gallery.

the Department of Musical Instruments

On the ground floor there is my second favorite part of the museum: a wonderful section dedicated to antique musical instruments.

Most of the instruments belonged to the collection of Grand Prince Ferdinando de Medici (1663 – 1713) who was an avid musician and patron of the arts.

It was under Ferdinando that Bartolomeo Cristoferi was working – at one of the Medici villas in Florence (today the ‘Villa Demidoff’) – when he invented the piano, one of the most loved instruments today. 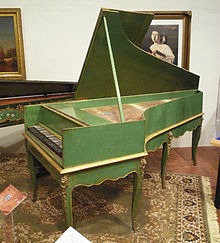 In this part of the museum you can see forerunners of the piano (the harpsichord and spinet), some early models, and a video on the mechanics of this instrument.

There’s also one of the first examples of an upright vertical piano (this is hilarious – you have to see it to understand why…).

There are violas, violins, and cellos, a few of which are original Stradivari.

The Accademia Gallery also offers a multimedia demonstration on computers.

You can listen to sample pieces of music to hear how antique instruments sounded and also learn about the history of music.

Another very nice section – still on the ground floor - is a collection of plaster casts, mostly by Lorenzo Bartolini and Luigi Pampaloni – the 19th century sculptors. 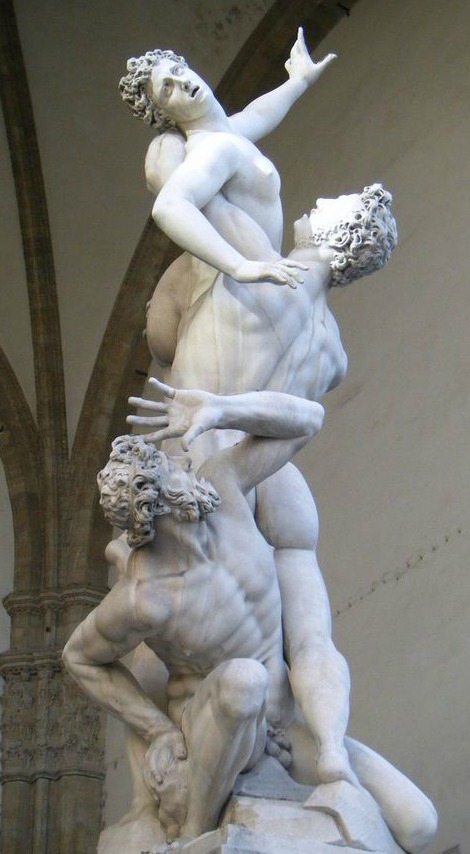 These artists worked for the Florentine elite and produced busts and statues for aristocrats and nobles, as well as for Napoleon and the Bonaparte family, some of which can be seen here.

Pampaloni was also an expert at sculpting models of children and (or together with) animals. Some of these are extremely poignant and tender and will remain in the mind long after.

This gallery of plaster models also has a video that explains how a sculpture is actually made: you watch the artist at each step of the procedure and it’s very informative and interesting.

There are also other works by Michelangelo.

The hall leading up to the David includes the very well-known Michelangelo sculptures, all unfinished, of the four 'Prisoners' made in 1530 circa.

These pieces were originally placed in the Boboli Gardens in Palazzo Pitti in the Grotta del Buontalenti.

The Gallery also houses Giambologna’s original plaster model for the sculpture, the ‘Rape of the Sabines’ (1582).

The original finished marble work is found in the Loggia dei Lanzi in Piazza Signoria (photo above).

As for the paintings and other works, the Accademia Gallery covers Florentine art from the 13th to 19th century and also includes a valuable collection of Russian icons from the 1700's.

Most paintings in the Gallery are religious themed. 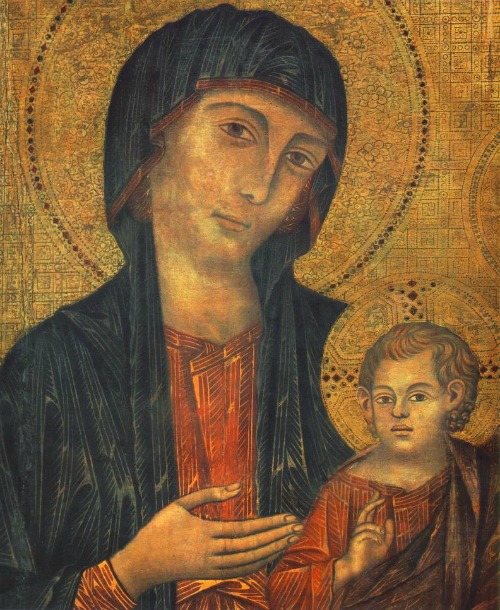 This is because many used to be part of convents and monasteries in Florence that were eventually shut down.

One of the most significant rooms in the Gallery is dedicated to paintings from the 1200's and 1300's focusing on the school of Giotto, the pre-Renaissance master.

Giotto is considered one of the forerunners of the Renaissance since he was one of the first painters whose style reproduced the subject in a naturalistic way, rather than the symbolic manner common at the time.

On the upstairs floor of the Accademia Gallery there are examples of Byzantine painting.

These works are characterized by the use of gold work and by the fact that this type of painting was done on wood panels rather than canvas following a very specific and lengthy procedure.

These early pieces depict religious figures and subjects in an idealized and unreal manner, with very little (if any) visible human emotions or expression (see example above).

Seeing these works provides a real contrast to what was to come: the naturalistic and humanistic perspective of Renaissance art in the 1400's.

The Accademia Gallery is an elegant and spacious museum that is a pleasure to stroll around in.

In my estimation, one hour should be adequate for a general visit.

However, the lines are usually extremely long, so either get there early or book your tickets in advance (booking surcharge is €4, phone to book: 055 29 48 83).

You can skip the line and just go in if you have a Florence Card, a tourist pass to museums and monuments!

Galleria dell’Accademia
see the official site of the Accademia Gallery for prices, booking information and details about exhibits and any eventual opening time changes

Find out more about Florence!

Photos of the Accademia Gallery care of Wikipedia

FlorenceWebGuide Homepage from the Accademia Gallery

back to Florence Museums