The Gucci Museum in Florence

It all Started in Firenze in 1921...
Find Out about the Iconic Fashion House 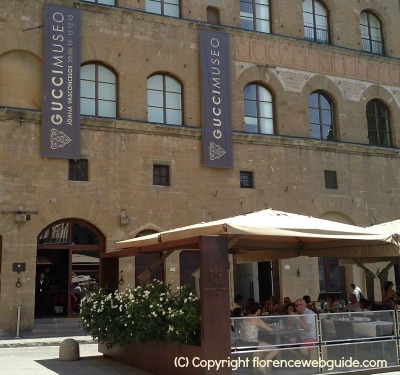 Yes, this too is Florence.

And a BIG part of it too!

Countless people make Firenze their destination each year also because this great city is home to this legendary Italian brand.

Getting a bag or pair of shoes with the famous double GG logo from the original home of Gucci can be a raison-d'etre for many vacationers here in town!

And now, as of 2011 when the museum opened, fashion-lovers can also take a little journey through the life of the illustrious brand.

The Gucci Museum is a collection of the house's classic pieces that have made an indelible mark on the world of fashion, and the glamorous celebrities who have donned them.

Some Background for Gucci

The Gucci company was started in Florence in 1921 by Guccio Gucci (hence, the double GG logo).

Guccio was working as a porter in London at the Savoy hotel.

Handling the upper-class clientele's luggage gave him the inspiration to start a line of high-end travel cases.

He returned to his home city of Firenze and started making his top quality artisan bags.

This connection to England however is one that has influenced the Gucci style from its origins and still today - something the Gucci museum lets you see quite clearly.

One example is the instantly recognizable green and red striped band. 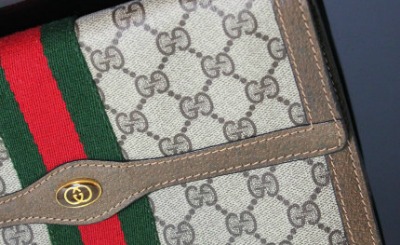 The idea for this striped pattern originates from the world of English horse-riding.

To hold the saddle on a horse's back, a special belt is used under the belly of the animal, called a 'web'.

This British style green and red 'web' was the inspiration for Gucci's signature look!

In fact, along with suitcases, the company started out producing equestrian saddlery as well (and still does so today).

What's in the Gucci Museum?

The displays are set up by items and epoques that made the company so popular.

Interspersed throughout the museum are elegant black-and-white photos of celebrity clients of the brand. 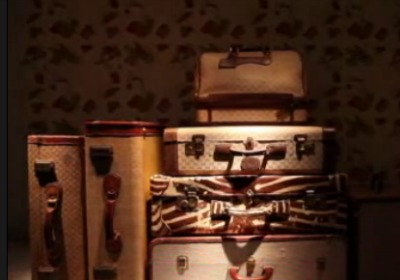 This is where the Gucci Museum starts.

This first display echoes where the famous designer himself first started - with luxury travel cases.

Suitcases and trunks from the 1930's and 40's with the original Gucci pattern of 'Diamante' fill the room.

These travel pieces and accessories are masterpieces of craftmanship and functionality.

In one area you can see an enormous black trunk, with a computer image right next to it on the wall.

The graphic shows how the case opens and all the conveniences inside such as clothes hangers and drawers, a mini-closet built for transport to the most elegant of destinations. 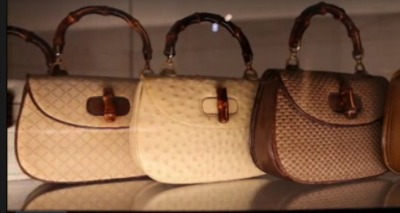 At the 'Handbags' section you can see the house's innovative bamboo handle bags, first produced in 1947 and other ladies' purses and evening bags.

After the war, raw materials were hard to come by.

This did not deter Gucci though.

The forward-thinking designer was the first to start using 'poor' materials to create luxury goods, such as bamboo for buttons and handles and hemp canvas for bags.

This part of the Gucci museum has an extremely informative video showing a bamboo bag made from start to finish by the artisans.

To make one bag 140 pieces are needed which are put together over 2 days.

The video shows you the procedure from beginning to end. 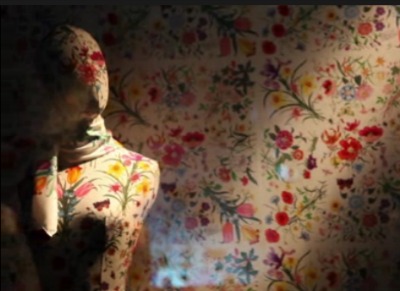 Flora has an original story.

Flora (= flower) is the name given to the flowered pattern designed by Gucci for Princess Grace.

Rudolfo Gucci wanted to give a present to the princess, and asked her to tell him what she would like the house to make for her.

Of course, the princess declined saying that no gift was necessary, but Rudolfo was so persistent that Grace finally gave in: a scarf.

The Flora pattern was the result.

Using 38 different colors, the pattern is made up of flowers from all four seasons as well as beautiful insects such as butterflies and dragonflies.

The Flora pattern was put on the silk with a stencil print: each color required its own stencil to be added separately, so to make one scarf 38 stencils were used!

Flora is an homage to nature and symbolizes the changing of the seasons and the phases of life.

The Flora pattern has become a timeless Gucci classic which has since been used not only for scarves but for many items that you can see in this section. 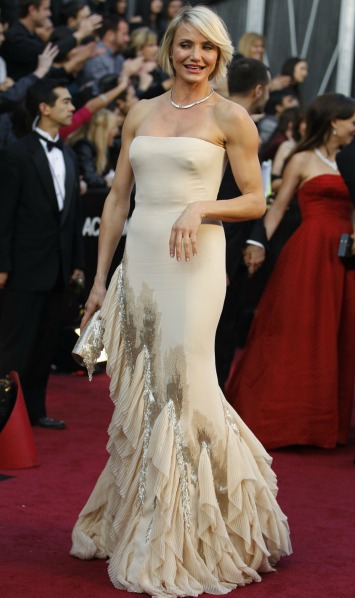 The 'Evening' section of the Gucci Museum is really special.

This is where you can see gowns made for celebrities to wear on the red carpet at occasions such as Oscar night or the Cannes film festival.

Gucci is one of the preferred designers to the stars and has a vast collection of evening dresses custom made for its elite clientele, which means that this display changes often.

When I was there I saw gowns made for and worn by Salma Hayek, Blake Lively and Cameron Diaz.

The material used for these pieces is exceptional - something that you can only see up close like this and not on TV.

Examples include sequins made of actual bronze or platinum and one gown made almost entirely of cock feathers of all sizes.

It's all enriched with video footage of the star wearing the gowns that are on display, such as Cameron Diaz arriving at the 2012 Academy Awards in her white Gucci. 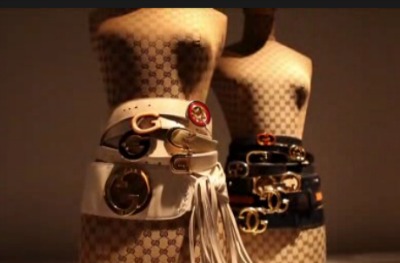 As the name suggests, this area is dedicated to the Gucci logo in all its glory.

The actual double G trademark was only officialized in the 1960's, and this section shows how, in the years right after that, use of the 'GG' went a bit overboard.

The houses original 'Diamante' pattern which was simply diamond-shaped lines, became the now-famous lines with the 'GG' at the crosses (see an example 2nd pic from top above, wallet with red/green band).

Here you can see whole suits covered in this trademark look with the pattern and logo embossed in the velvet (most of these items are from the 1970's).

The 'GG' symbol went from being a small discreetly placed label to being the main focus, as people wanted everyone to know that their item was a Gucci.

This epoque coincided with the de-glamourization of Gucci to some extent, as the brand went from being exclusively a label for the very wealthy, to being - while still expensive - more affordable to 'everyday' folk. 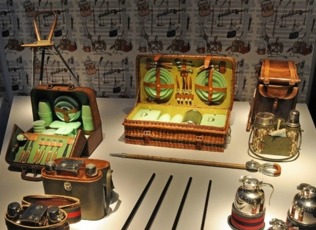 The Gucci Museum doesn't just show fashion, but also items made for fun and leisure.

Here you can really see the British influence I mentioned before.

Objects such as picnic sets, thermoses, and household items inspired by hunting, golf and tennis are all on display.

These articles were originally sold as giftware and souvenirs for Gucci enthusiasts not content to merely wear the brand but who also wanted to ornate their home with it!

Some of the items could be described as kitsch, such as a set of glasses with animal heads (another reference to hunting, a British pastime). 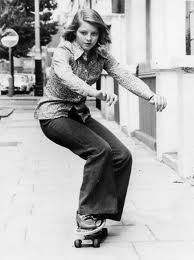 This section is dedicated to the one-and-only Gucci loafer, the house's biggest seller.

The flat moccassin with the metal horse-bit on the front (another Gucci innovation inspired by the equestrian world) has become a classic the world over since its debut in 1953.

A huge hit in Hollywood, this classic loafer has been donned by some of the biggest stars of the cinema, both past and present.

The 'Loafer' section shows men's and ladies' shoes produced through the years, as well as the famous VIP's who have worn them.

The walls are lined with photos showing movie scenes and real-life moments of celebrities with this signature shoe on their feet. 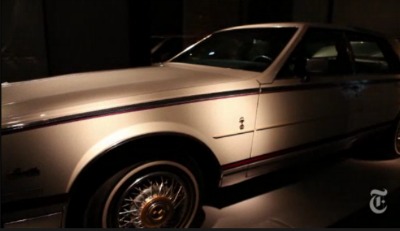 One of the star pieces at the museum is the vintage Gucci Cadillac Seville dated 1979.

In the 70's Aldo Gucci, Guccio's son, was in the U.S. and decided to branch out into the automobile field.

In collaboration with Cadillac a limited series of these luxury cars were produced, only 200 units.

Interestingly, when Gucci decided to open a museum, they found that they did not actually have enough of their own vintage pieces to set up a decent collection.

The company actually had to contact many of its clients and use other means such as auction houses, vintage stores and even Ebay to get together its museum display.

This Cadillac - which came from Florida - is among the pieces that was procured in this way. 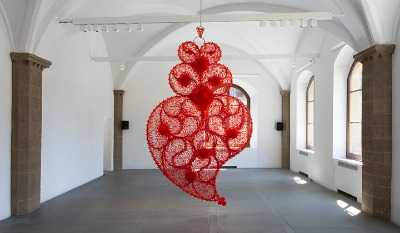 The Gucci Museum is not just about the legendary designer.

A section of the display is also dedicated to a contemporary art exhibit that changes every six months.

Exhibits come from the Pinault Collection and are set up in three rooms of the palazzo.

See an example left from the exhibit of the Portuguese artist Joana Vasconcelos.

More at the Gucci Museum 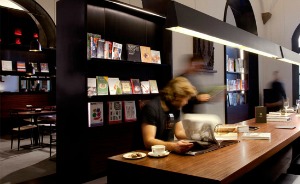 The museum is located in Piazza Signoria, Florence's most historic square.

The 14th century Palazzo della Mercanzia is home to the museum, a building that goes back to 1359.

This palazzo was a sort of Chamber of Commerce duriing the Renaissance and was also where Florentine merchants could come to resolve disputes with the guilds.

The building is not just a museum, but also a bookshop and a café/restaurant (these two areas are open to the general public and don't require a ticket).

The bookshop is dedicated to books on art, fashion and architecture.

There is also a very fun giftshop with irresistible stuff like Gucci aprons, writing paper, key chains and ipad cases that is right off the piazza and open to all. 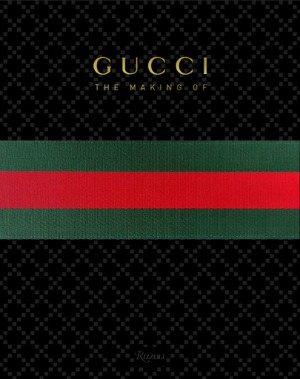 This is a no-brainer really.

If you love fashion, go, if not, you might want to skip it.

Having said that however, there is something very glamorous about all things Gucci and just soaking up the essence of the GG world has its undeniable attractions, even for non-fashion lovers.

The only bit I felt the museum was lacking in was that you don't learn much at all about the people behind the legendary name.

The emphasis is more on the items and the VIP's who used them, and not on the Gucci dynasty and the faces behind the success of the brand.

To make up for this though, the museum has a fantastic book called 'Gucci: the Making of' available for reading - it's at the entrance and can be taken to the reading area if you want to learn more about the family  (you can also buy one for €75).

ticket: €6 (you might like to know that half of all ticket sales go to the city of Florence for art restoration projects)

Back to Homepage from Gucci Museum

Back to Quirky Florence Museums